Scene It All Before

Having searched my new house high and low I have to conclude that in some foreign barn there remains a cardboard box that will be forever England. Unfortunately said box contains a proportion of my wargaming scenery.

To wilfully misquote master Schwarzenneger in Predator - it apparently never made it to the chopper.

This means that having now established myself in the worlds smallest man cave, my first wargaming mission is to replace a load of stream and road tiles - well it is if I'm to get any kind of game onto a table sometime soon.

Fortunately here in the land of kah pet and central heating I can order a veritable cornucopia of scenic goodies via high speed broadband and have it delivered for next to nowt at the mere click of a mouse.   (By the way remind me to tell you how in the early days of the inter web I bought several Series 3 Land Rovers one afternoon by mistake - all via a mere and very careless click of a mouse).

Sitting outside Merinchal post office poncing off their internet and waiting two weeks for a potential delivery at extortionate cost already seems so long ago now.

Anywhoo the packet pictured below duly arrived by drone (unfortunately not the flying sort). 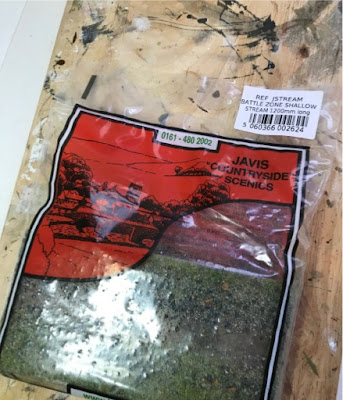 I'm posting about it because I'd not come across the stuff before and initially only ordered the one in case it was crap; a thought the terrain cognoscenti amongst you may also have inadvisably harboured.

It comes on a long length (120cm) of "stiffened" paper and in its 'just out of the packet' state is way too delicate for gaming usage. With that said, stick it down on lengths of 2mm plastic card, spray it with matt varnish as a fixative for all the grit, add a ribbon of that fake water stuff and…


Tah darr! I give you the Insta Stream.

I've done this one as test piece and since I have a need for river bends, fords, etc I've now placed an order for more. If all goes well they will form a conga line of 24cm lengths across my hexed terrain mat and should serve okay for my chosen 6mm and 15mm games.

The products paper backing can be easily cut with scissors by the way, and the river tile in the piccy above is 24cm long and 7.5cm wide, should some sense of scale be required.

Thankfully all my 6mm ECW buildings made it across La Manche in a separate container so that's saved a few quid and a whole lot of painting - as The Current Mrs Broom (or Mrs Glass Half Full as she should be called), was only to keen to point out.

I was putting the last of my books up in the loft yesterday when this little gem escaped from its box and clonked me on the head. 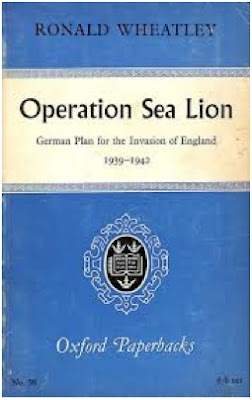 It's a great book - (published in 1958) and for some reason it contains lots of detail that seems to have been lost or glossed over in later more widely published tomes. If you haven't got it already and "what if's" like Sealion intrigue you, its well worth acquiring for reference purposes.

Its author, Ronald Wheatley and I share the same surname and perhaps it was that which set me off thinking about something that's been bugging me for years, namely, why am I so damned interested in military history? I mean why not football or even ruddy ice skating for that matter? Why am I morbidly scared of heights when in 56 years I've never fallen off anything higher than a garden wall?

Then there's Geography. Whenever I've been free to choose a UK holiday destination its always been south or preferably west and never north or east. Gentle hills and woodland are much more appealing to me than equally splendid mountain or moor, but why is that? Could it be that we are all "hard wired" to some degree with certain genetically inherited ancestral preferences?

Fanciful stuff I'm sure you'll agree, but my direct male family line has had (disappointingly) no record of military service and has never had an interest in such matters as far as I can tell. Motorbikes and architecture yes… history and military stuff, nope. So could this obsession of mine have been spurred by nature rather than nurture?

As a quick for instance. When I took up English Civil War reenactment I had to choose between joining a Royalist or a Parliamentarian Regiment and though leftward leaning and pro parliament in my current political sympathies I felt a strong pull to the Royalist camp for some strange reason.

Two year after joining Sir William Pennyman's Regiment of Foote (Royalist) I discovered this chap - who in 1644 took over Sir John Redman's Regiment, shares my surname, and comes from an area where elements of my family are known to have originated. I'm tracing family trees at the moment so I may find out if he's some sort of relation (if records go back that far). From a practical point of view it'd be good to be able to say, "sorry I've just bought another batch of Baccus 6mm musketeers love but, I can't help it, its genetic. Blame Thomas!"


Confusingly there was also a Captain Thomas Wheatley in Sir George Wentworth's Regiment of Foote (Royalist) who in a contemporary account apparently led a herd of cows through the siege lines around Pontefract castle in order to aide the defenders. One has to wonder how closely the siege was being prosecuted at the time!

Of course The more cynical realistic amongst you will no doubt point to a possible adolescent over exposure to 70's war films Airfix kits and dear old Battle Picture Library comics - as the true source of my military fixation. Thankfully, since we now live in a post truth world where published opinion need not suffer the burden of proof I think I shall stick to my more romantic notion of a distant English Civil War relative who as a result of his experiences has managed to code into my very DNA a deep aversion to the dangerous north!

Email ThisBlogThis!Share to TwitterShare to FacebookShare to Pinterest
Labels: A Brief Digression
Newer Posts Older Posts Home
Subscribe to: Posts (Atom)
Intended to cover a specific one off campaign, this originally ECW themed blog has now (unlike the King) been granted a stay of execution while I explore other gaming genres and rule sets.
With any luck you'll drop in from time to time to see what's going on...